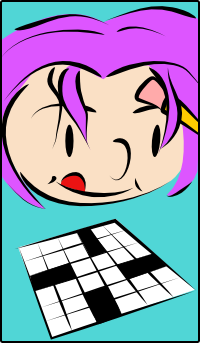 Prompted by T. Campbell's invention of the cruciverbacomic, we are pleased to present the Electric Puppet Crossword Generator, a free program for automatically generating crossword puzzles from a starting grid and a dictionary.

Read on for instructions on:

Any updates to the program will be posted on our nifty news feed. Please send any questions, comments, or patches to markv [at] eptcomic.com 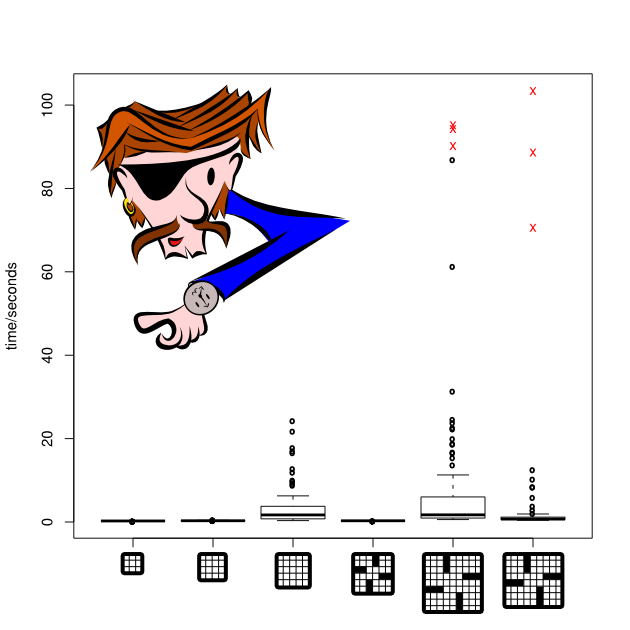 The tarball and zip archives come with several sample grid files that can be used as input to the program. Here are box plots of the run time distributions for 100 runs on each grid. The six runs where the grid was not solved after exploring the default 100000 nodes are marked with red x's. Most of the grids are solved in under a second, while the 5x5 blank and 9x9 slotted grids take 5 to 10 seconds. For a small number of runs on the larger grids, an unfortunate choice of seed can result in a much longer run time or failure to solve the grid.

Extending the largest sample grids (e.g., to a 6x6 blank grid) leads to much longer run times due to combinatorial expansion (although adding strategic black squares can ameliorate this). We hope to improve this in future versions with more aggressive pruning. Fortunately, the run times for the T. Campbell grid (far right) are well behaved, so the current version is ready for all of your cruciverbacomic needs.

Here are some pre-filled grids for people who would prefer not to download the program. Disclamer: these crosswords were automatically generated by eptcross.py from our system dictionary and have not been screened for naughty or offensive words. Caveat emptor. Each linked text file has the 97 to 100 solutions from the corresponding benchmark run.