Congratulations to The Introvert Manifesto on hitting strip #200. The drama has been ratcheting up recently, so good time to jump in if you're not reading it already.

To celebrate EPT's second issue, we made a one minute animation of all 24 pages being drawn. You can watch the movie and see how it was made here.

We submitted our movie page to Boing Boing and Cory Doctorow was kind enough to post it.

To give you an idea of the kind of cartwheels we're currently turning, this is a picture of the laptop that EPT is drawn on, circa 2008: 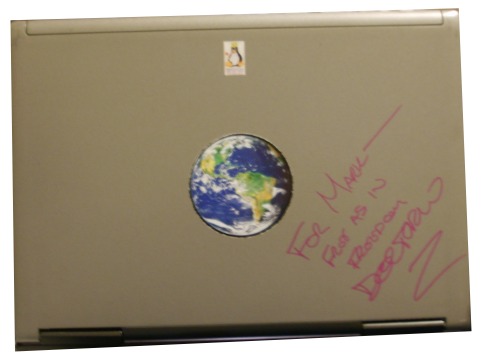 If you're not already familiar with Cory Doctorow, his books are all at his website. Little Brother is a great place to start, as is Futuristic Tales of the Here and Now, a comics adaptation of some of his short stories.

Tony Cliff is wrapping up the final chapter of Delilah Dirk and The Turkish Lieutenant. If you like swashbuckling adventures drawn in the lavish colors of the Flight anthology, now is a great time to hop over and read the full story.

To fund reprinting costs, Angela Melick is having a 33% off sale on the first Wasted Talent collection -- We are the Engineers.